The representation in the Evans Engineering Logo is 3 Poincare Lines. One line does not intersect the other two. Two of the lines intersect at a point centered to the left. The 3 Poincare Lines represent a line with two external lines intersecting at a single point. This is similar to a figure which might be drawn to illustrate the Euclidean Parallel Line Postulate, with notable exceptions!

In the Euclidean Parallel Line Postulate, through a point external to a line, one and only one line can be drawn which does not intersect the original line. Euclid stated this as a postulate, concluding that it could not be proved as a theorem from any of his other postulates. The Poincare representation is one of many now known geometries in which Euclid's Parallel Postulate does not hold - others being spherical and elliptical geometries in which parallel (non-intersecting) lines cannot be drawn and various hyperbolic geometries in which multiple non-intersecting (parallel) lines can be drawn.

Parallel lines are straight (shortest distance between two points) and non-intersecting. They are not necessarily equal distant. In the classic representation of parallel lines as being equidistant straight lines "like railroad tracks" it should be noted that at most one rail can actually be straight (a great circle) on the surface of the earth. The other rail will not be straight (i.e. not the shortest distance between two points on the rail). The railroad tracks are equidistant curves, but are not parallel because they are not straight.

The Poincaré half-plane model is illustrated in Wikipedia.

The distance metric in the Poincare half-plane model is:

The Poincare Circle is illustrated following: 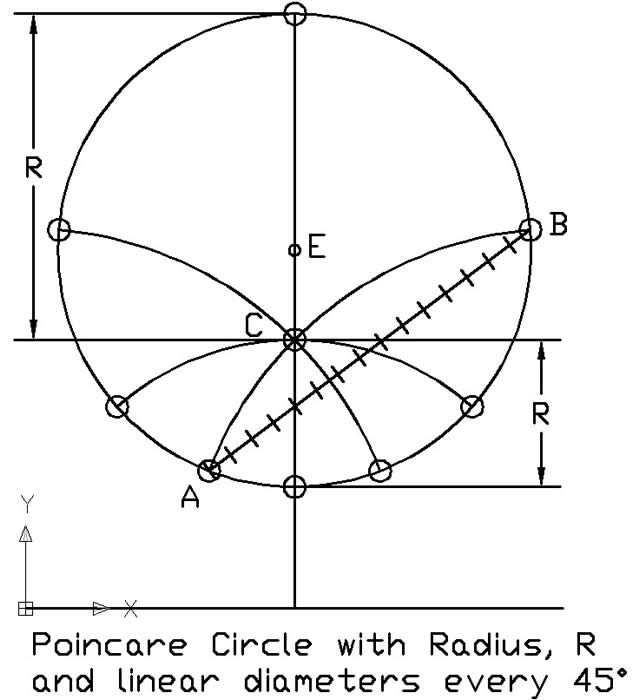 The Logo is a Trade Mark of Evans Engineering.

Back to EE - Home Page